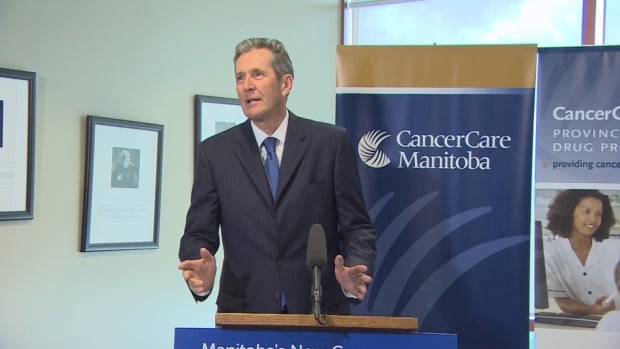 The province announced an additional $4 million in funding for cancer drugs on Monday. The money was added to the 2016 budget, bringing the total amount spent on intravenous cancer medication to about $50 million annually.

Pallister shared a personal story about his family's own struggles with cancer and the loss of his father, Bill, to the disease during the announcement made at CancerCare Manitoba.

"Cancer stole my dad from us. But cancer steals moms from their children too, and husbands from their wives, and friends from one another."

"By continuing to increase our investments in [covering the costs of] cancer drugs, we help fight this terrible disease and we support health care providers who are working so hard to keep our loved ones here longer," said Pallister.

In Manitoba, cancer patients do not have to pay for intravenous cancer medications or approved oral medications, whether they receive treatment at home or in hospital.

The Provincial Oncology Drug Program is administered by CancerCare Manitoba and is accessible through various hubs throughout the province.

The program works alongside the Home Cancer Drug Program, which provides some free oral cancer medications and support drugs, such as anti-nausea medication, that help counter the side-effects of chemotherapy.

"Cancer is the leading cause of death in Manitoba and in Canada," said Dr. Sri Navaratnam, president and CEO, CancerCare Manitoba.

"We are extremely fortunate that Manitobans with cancer are able to receive both intravenous and oral chemotherapy drugs … at no cost to them."

The premier also said Manitoba is working with other provinces to look at ways to help ensure the affordability of cancer treatments in the future.

"This national work to ensure affordability is significant, because there are many news drugs being developed, and it's anticipated that cancer drug costs will continue to rise," said Pallister.

Before winning a majority government in April, the PCs came under fire from the NDP for a comment made by Pallister stating there were "no sacred cows" when it came to cuts. NDP Leader Greg Selinger suggested at the time that Pallister would make Manitobans pay for cancer care drugs if he were elected.

"The previous administration was desperate in their latter days, so they resorted to political tactics that were, in my mind, more reminiscent of U.S.-style politics than they were fair-minded, or open, or honest, or in the interest of Manitobans," said Pallister.

The new PC government also stated there would be a full review of the previous government's commitments, as MLAs look to cut costs while dealing with a $890-million deficit.