Cannabis use for medicinal purposes dates back at least 3,000 years.[1-5] It was introduced into Western medicine in 1839 by W.B. O’Shaughnessy, a surgeon who learned of its medicinal properties while working in India for the British East India Company. Its use was promoted for reported analgesic, sedative, anti-inflammatory, antispasmodic, andanticonvulsant effects.

In 1937, the U.S. Treasury Department introduced the Marihuana Tax Act. This Act imposed a levy of $1 per ounce for medicinal use of Cannabis and $100 per ounce for nonmedical use. Physicians in the United States were the principal opponents of the Act. The American Medical Association (AMA) opposed the Act because physicians were required to pay a special tax for prescribing Cannabis, use special order forms to procure it, and keep special records concerning its professional use. In addition, the AMA believed that objective evidence that Cannabis was harmful was lacking and that passage of the Act would impede further research into its medicinal worth.[6] In 1942, Cannabis was removed from the U.S. Pharmacopoeia because of persistent concerns about its potential to cause harm.[2,3]

In 1951, Congress passed the Boggs Act, which for the first time included Cannabis with narcotic drugs. In 1970, with the passage of the Controlled Substances Act, marijuana was classified by Congress as a Schedule I drug. Drugs in Schedule I are distinguished as having no currently accepted medicinal use in the United States. Other Schedule I substances include heroin, LSD, mescaline, and methaqualone.

Despite its designation as having no medicinal use, Cannabis was distributed by the U.S. government to patients on a case-by-case basis under the Compassionate Use Investigational New Drug program established in 1978. Distribution of Cannabis through this program was discontinued in 1992.[1-4] Although federal law prohibits the use of Cannabis, figure 1 below shows the states and territories that have legalized Cannabis use for medical purposes. Additional states have legalized only one ingredient in Cannabis, such as cannabidiol (CBD), and are not included in the map. Some medical marijuana laws are broader than others, and there is state-to-state variation as to the types of medical conditions for which treatment is allowed. 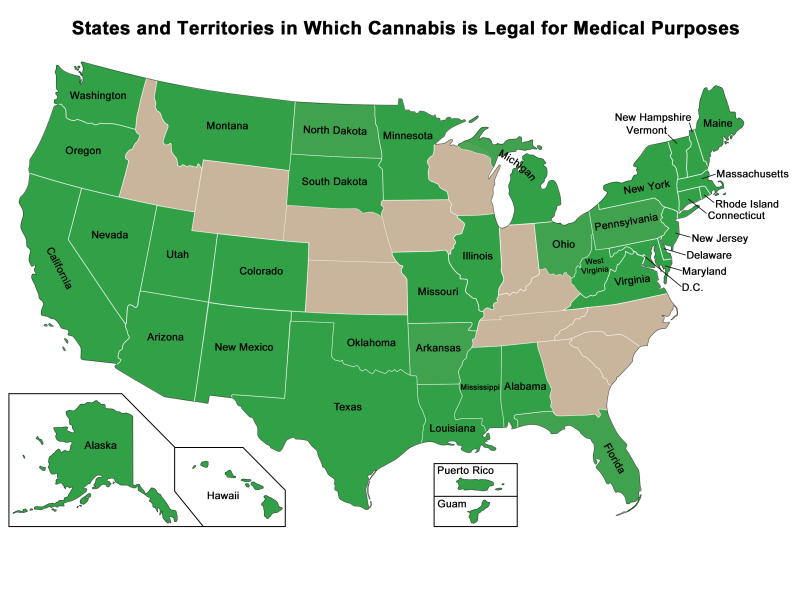 The main psychoactive constituent of Cannabis was identified as delta-9-tetrahydrocannabinol (THC). In 1986, anisomer of synthetic delta-9-THC in sesame oil was licensed and approved for the treatment of chemotherapy-associated nausea and vomiting under the generic name dronabinol. Clinical trials determined that dronabinol was as effective as or better than other antiemetic agents available at the time.[7] Dronabinol was also studied for its ability to stimulate weight gain in patients with AIDS in the late 1980s. Thus, the indications were expanded to include treatment of anorexia associated with human immunodeficiency virus infection in 1992. Clinical trial results showed no statistically significant weight gain, although patients reported an improvement in appetite.[8,9] Another important cannabinoid found inCannabis is CBD.[10] This is a nonpsychoactive cannabinoid, which is an analog of THC.

Nabiximols (Sativex), a Cannabis extract with a 1:1 ratio of THC:CBD, is approved in Canada (under the Notice of Compliance with Conditions) for symptomatic relief of pain in advanced cancer and multiple sclerosis.[16] Canada, New Zealand, and some countries in Europe also approve nabiximols for spasticity of multiple sclerosis, a common symptom that may include muscle stiffness, reduced mobility, and pain, and for which existing therapy is unsatisfactory.